The goal of the Grand Largue project was to develop a system of automated auxiliary sails for working boats. This project has been labeled by the Pôle Mer Bretagne in 2007 and was funded by the Brittany Region and some local collectivities. 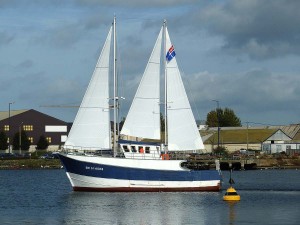 A first generation of automated sails was installed on the laboratory boat Grand Largue , former wooden trawler 16 meters. This system has been operational since 2010. The Grand Largue is characterized by :

Sea trials have shown that the sails allow decreases in fuel consumption (depending on wind conditions and heading) and that they declined consistently the rolling.

This first generation had some shortcomings, such as the lack of modularity and ergonomics, as well as the lack of some sensors. It will be replaced by a second generation, which will erase these and add some features.

These two generations are concerning classical sails. Another approach consists to use sails shaped an airplane wing, or wing sails, having a best efficiency.